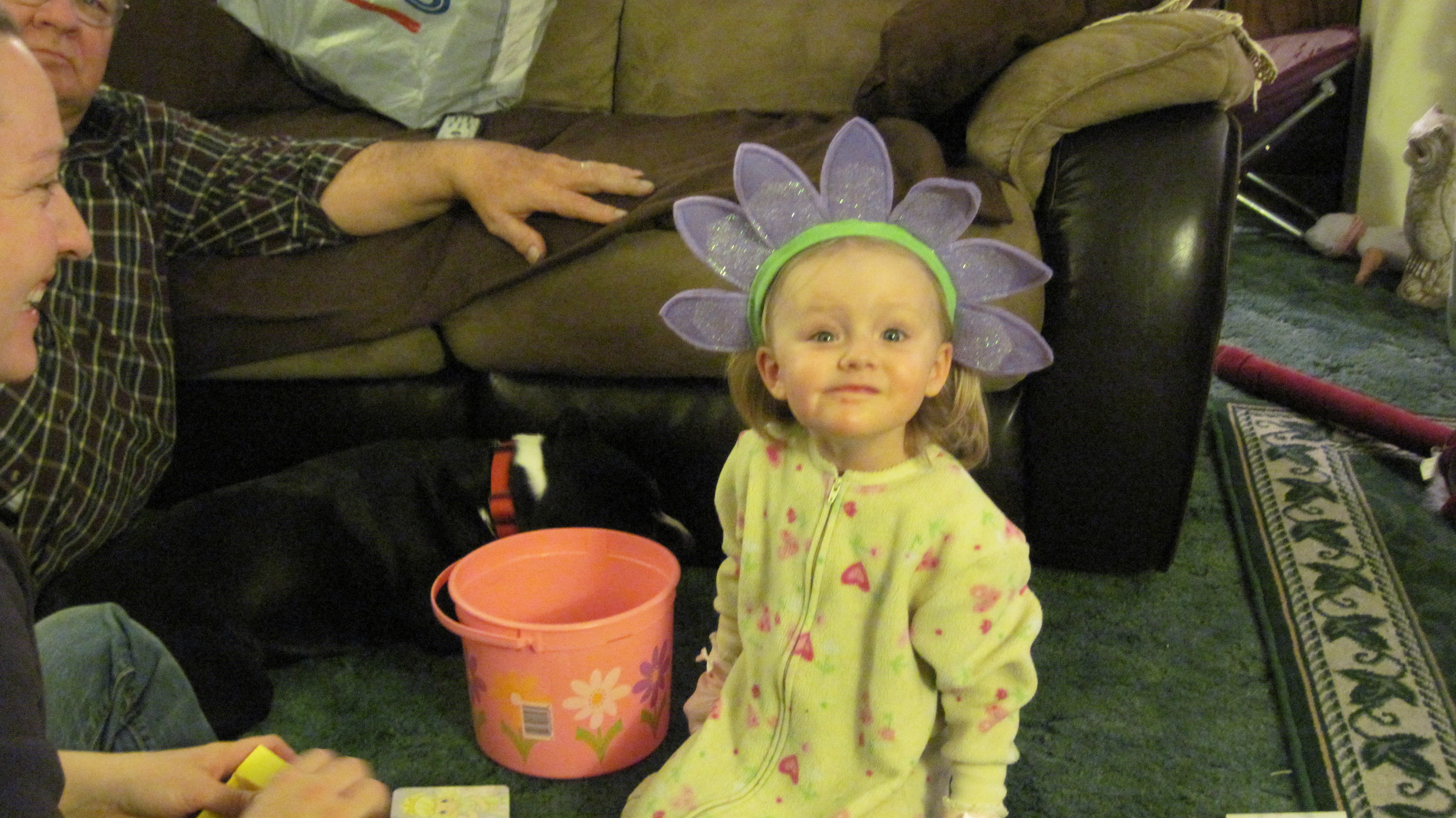 
Yesterday we took our daughter to an egg, er, scramble.  The group that put it together was thoughtful and split up the field into three age categories.  She ran with the 1-4 year olds, their parents..and older siblings.  She came out ok, but next year I suspect she will be a bit more aggressive…. oh, what we teach our children from the very beginning.

After the hunt, we went over to the playground for a while.  There is a feature on this playground built for wheelchair fun; there is a long incline ramp, a bridge, and then a very gentle slide.  Needless to say, the kids on two feet and wheels really seem to dig it, including my daughter.  She spent quite a few moments on this particular piece of equipment, until one time instead of going down the slide, she decided to go up.  She did so at the peril of another girl about her age.

The mother of the other child, my daughter, and my daughter’s father were all within arm’s reach, so the girls didn’t end up with any serious injury physically, but the interplay between my kiddo and her Papa that followed is something I want to talk about.

My daughter has a very solid sense of self, she is articulate and opinionated and we encourage this. She tends to see things for what they are, doesn’t follow the crowd too much, and generally just sort of blissfully fits wherever/whatever she’s doing.  She spends most of her days with me, but often Papa is around, and when he is, she is happiest.  Her desire for his attention, approval, interest in her, and general involvement with her seems to exceed her desire for the same from me.  Consequently, she is much more sensitive to his responses toward her.

She listens to his ideas, to his guidance and suggestion, and to his heart, and most of the time, she does so silently. You can see the acknowledgment on her face, if you’re looking for it, and sometimes in her body language and movements, but her acknowledgement of his communications is almost never verbalized (at least not until later).

Russ tends to be very gentle with her, he gets down physically so he is face to face, he plays, he teaches, he leads by example, he shares himself.  Sometimes, however, he reprimands, and it flattens her. He can be too firm, too rough… this is when the impatience sets in. (Can any of you relate?? I know I can.)  But he can also be direct and loving, yet if he reprimands even in this calm and connected state, she just crumbles. And crumbling can look like falling apart emotionally, but it can also look like defensiveness and anger.

The range of emotional response from her toward him is greater and more intense than it is with me.  There are reasons for this, unique to the personalities of all three of us, which I won’t go into in this post, but understanding this is important to understanding why I notice some of their interactions more than others, and why I’m writing about the one yesterday.

After my daughter decided to assume the position to climb UP the slide, and once her Papa realized that it was going to cause a collision, I think he attempted to verbally intervene. I don’t think she responded however, which agitated all involved, and the girls collided. The mom of the girl helped her daughter, who was upset because of the physical “bump” she’d received, and Russ took our daughter aside.  He knelt down, holding her (or trying to), and I assume began to tell her something along the lines of why he thought it was not a good idea for her to climb up a slide with other children concurrently sliding down the same slide.

I watched from a distance, and saw only the body language between the two… He was irritated but seemed to be providing her “Papa kindness” (which means he was not shouting or diminishing her in some way).  He was talking to her face to face, at her height, but she was pulling away from him and wouldn’t look at him.  He persisted, physically trying to get her to stay near enough to him that they could talk by taking her hand, holding her arm and waist, and attempting to have the conversation. She pushed him off, was defensive, and eventually decided she was done and ran off to play on the opposite part of the playground from him.

This is when I walked over to him and asked what had happened.

I got the run down, followed by a papa expressing his dismay that his daughter just won’t listen to him.

I thought about what I’d seen for a moment and concluded that my husband and my daughter need to spend a lot more time together.  He is intuitive and sensitive, and given the necessary amount of opportunity to discover and experience one another (Papa and daughter), together, he would have been able to see exactly what I was seeing. He would have become aware, would have realized his daughter’s plight and need, would have seen the development that had actually occurred (that was masked and hiding from him in that moment), and he would have been able to diffuse the situation immediately in a way that left both Papa and kiddo with positive feelings about self and environment.

He didn’t see however, not this time. He didn’t realize it in the moment, but our daughter was embarrassed. She was embarrassed by him not realizing that she got the lesson in the very first sentence, the first three-five words, or perhaps even in the physical action of either him helping to prevent a major collision (if he did, I didn’t see), or in the collision itself. I don’t think she’s ever climbed up a slide with a kid coming down before…

I know the signs of not ‘seeing’ soon enough. I have experienced it plenty of times myself when I don’t see – until later – and then I have to repair. Humility is something I seem to be gaining more and more of, as she gets older… And while I suppose this is a good thing, it doesn’t exactly feel so great.

What her Papa and I don’t sometimes realize is just exactly how little can be so much.. He felt he needed to reiterate to her the lesson he knew she needed to get from the experience, not realizing all the while, she had already gotten it.

When he insisted she give him her attention so he could explain and teach (what amounted to her as reprimand), she rejected him. She fought back to hold on to her dignity and he held on because of his reasons.  I suspect those reasons consisted (at least in part) of him genuinely wanting to encourage her social development, increase her knowledge base for the purpose of future self-safety (just a week ago, she was the kid coming down when another was coming up, and she got hurt), as well as perhaps a sense within him of needing to do something because of the other adults around. (I don’t know what his motivations were, I didn’t ask specifically.) The result of the two, each struggling to be heard, to hold on to their own sense of self and need, was a battle that divided them.

They reconnected an hour or so later, but the rift was there and one of them will consciously remember it (the adult), while the other will subconsciously file it away. It will shape future interactions and perceptions, for both of them.

Wisdom comes from screwing things up, and realizing it.

What if we, as parents, had the wisdom, awareness, and made the choice to step back from the interplay, while remaining engaged, for the purpose of gaining highly valuable perspective?  Doing so would allow our maturity to prevail, our intuition to be heard, and our awareness could do its job. Imagine what might happen in moments of struggle, where we think we are connected and moving toward each other, when in reality each is standing his/her ground defensively for their own reasons and the distance is actually mounting every second that goes by, if we as the parent/adult stepped back far enough to see.

We might see our inner selves shouting, “Hear me! Hear me! I need to be acknowledged and know my thoughts, my feelings, and my perspective is important and valued. I am significant.”

We might see our children silently shouting, “Hear me! Hear me! I need to be acknowledged and know my thoughts, my feelings, and my perspective is important and valued. I am significant.”

Our children are not emotionally mature. Many of us parents aren’t either. It’s our responsibility to give our children an environment safe for them to be emotionally immature, so they can develop at their own pace.  We can give them this environment because of our own maturity. When we, the adults, are aware of ourselves in such a way that we recognize what is motivating behaviors, what is lying underneath our responses and thought patterns, our perspectives change, as do our reactions. When we, the adults, have accepted ourselves fully, and confidently value ourselves, we have nothing to prove… especially to our children (or the other adults standing by, watching).  We also have nothing to have approved, because we know within us that we are ok. We know that we are beneficial and needed.  We don’t seek out that assurance, it is within us.

Our children seek that assurance until their emotional foundation is solid and developed to the point where they have the ability to provide themselves with this assurance, and regenerate it when it is temporarily not able to be found. How many adults do you know who are still functioning somewhere within this same realm of underdeveloped emotional security?

Power struggles with children are completely unnecessary.  And when they do occur, it is the responsibility of the adult to cause them to cease, and not by winning either. Let’s use this metaphor: Adult and child, each has a water gun and they’re playing a game with each other. The game is going well, until their guns run out of water.  They both need more water, there is only one hose, both need the water before the other one in order to “win”.  Where some adults/parents will demand the water first, others will give the water to their kid first, but then double up efforts in drenching (or let the kid win, which does the same for that child’s sense of self that doubled up drenching efforts does).

What if the adult had the wisdom and awareness to cause the hose to “run out” of water?  The game would have served its purpose, it would have been fun, and the battle that might have ensued, where each (adult and child) have a need to get met for themselves, would simply not have existed. The concluding moments would have been a “truce”, where each side respected the efforts of the other, and they had fun.

Perhaps you think this story is simplistic and unrealistic, maybe even childish… But I challenge you to reflect with an open mind on either the last, or the next time you and your child engage in being heard, and getting your own needs met.. You might just discover a SuperSoaker in your hands.

I’d love to have you share some of your own experiences where you were able to “see” what else was going on inside a battle or power struggle between you and your kid.