Yes, you heard me right.  Last night, my little one came to me with all the sincerity and gentleness she could muster (I’ve been sick, she knew I was exhausted), and asked if I would be willing to get her “princesses” (Polly Pocket collection) out for her.  She wanted to play with them with her Papa before she went to sleep.

I collected this, um, collection about two months ago and put them up because there are so many pieces that she was having an impossible time managing them. Everything was consistently strewn, which just caused her and me frustration.  (Not to mention the pairs of shoes that were no longer pairs.)

I think Polly Pockets are intended for kids about 6 and up.  My Bugz inherited these about a year ago and she seemed to dig them, even if they drove her nuts not being able to dress the dolls and such without assistance.  But eventually, it just got overwhelming, so I put them away for a while.

Last night, she presented this request, and instead of heaving a big sigh (which, I try not to do because well, it doesn’t feel good to have someone sigh or roll their eyes in exasperation at me… so why do it to my little person), I smiled.  I looked at her for a moment, to determine if she was serious or just grasping for something to stall the sleep sequence (she’s recently become reluctant to go to sleep – something I’ll address in another post).

She was serious.  She’d already spoken to her Papa to get his agreement to play the activity with her, and she a scenario going in her head for the princesses to play out. Though I knew she was tired, I saw a chance to honor her choice to genuinely request (instead of whine), and respect and grant her desires. Even though I thought there might be better uses of time, it didn’t matter, she is her own person and this is what she felt  was valuable at that moment… I had the pleasure of saying “yes”.

There was one caveat, however.  Her room was rather untidy (like, the floor had gone missing) and I knew that if we tried to add anything to it, it would just frustrate and ruin the experience.  I have been meaning to get to her room for a week or two now, but with all the traveling and randomness of our present life, and my excellent ability to selectively procrastinate, I hadn’t worked with her on it.  So, what a great opportunity (I hoped) to give her exactly her little heart’s desire, AND get her room cleaned… at 10pm, while hacking up a lung.  – This is when I laugh, the kind of laugh that warms the entire room.

I told her, and I quote, “I would be happy to get your princesses out for you, however I think your room has to be clean first, or you won’t be able to find a place to play with them.  Would you be willing to work with me (note: “work with me”, not, “help me”) to pick things up to make room for the princesses?”

And she did.  She found it tough at the beginning, not knowing what to do and quickly becoming overwhelmed. (How many times have you told your older kids to clean their room, a power struggle ensues, and nothing gets cleaned?  There is likely a really good reason…)  Rather than run her out, tell her to just keep trying (which is defeating in a situation like this), or enter a battle, I have found it very successful to simply give her a task.  In our case, I asked her to start by rounding up all the shoes and putting them in her closet.  Later, I asked her to organize them in the closet by shoving them to one side, but initially just getting them in there was a step she could manage with confidence and success.

As I worked on the various miscellaneous stuff that would overwhelm any kid, I continued to make little piles and ask her to do certain actions with each.  She continued to help, then yawned a bit and sat down.  I asked her if she was tired.  Yes.  Did she still want to play princesses tonight?  Yes.

Now, here is where some parents would respond with, “Well then, you have to keep cleaning.”  In our home, bribery and coercion are tactics that are avoided as much as possible.  So, instead of saying something like this, I simply acknowledged her fatigue, and I continued cleaning and organizing while she relaxed.  No expectation of her, no shame imposed on her need for rest, and no resentment coming from me.

Within a few moments, she happily resumed working with me; she saw something that sparked her interest, that she knew she could succeed at, and she jumped right in.  Within 10 minutes we had completed the task together, one that would have taken her hours alone, one that she would not have succeeded at because of her current neurological development.  And one that, had I insisted she do alone (after all, she did make the mess alone), would have diminished her and left her feeling a failure (sometimes parents force the issue believing they are teaching responsibility… that’s not the lesson that is received however, and the child does not come out the other side with more self esteem or confidence). 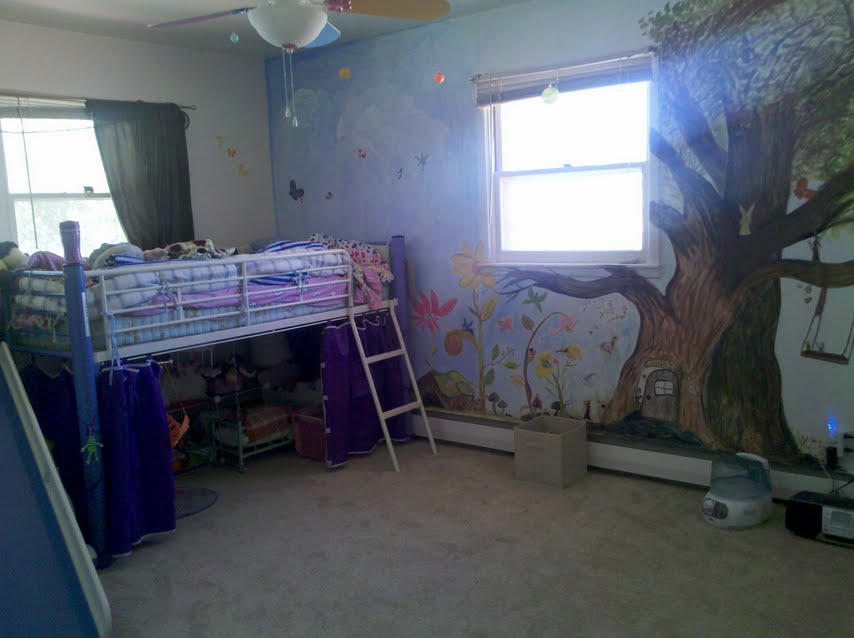 Her room was spectacular!  She was beaming with pride, accomplishment, and self satisfaction.  She was also exhibiting gratitude, as was I.

Papa came, princesses were unearthed, and I went to relax with my lungs.

I don’t know when they finally drifted off to sleep, but I don’t care either; thankfully our schedule allows for this. More importantly, I trust that she will now forever have the memory of being safe enough to ask Mama for something that really mattered to her, being valued enough by Mama to be granted her request, being capable enough to work with Mama to complete an important task, being cherished enough by Papa to be played with (even when we’re all tired), and being unconditionally loved so much, that her sleep could come gently.