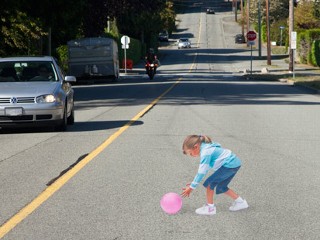 
In a separate post, I discussed the difference between the terms “listen” & “comply”.  Toward the end of my thoughts, I ventured into the ever present, “But what if there is a reason my kid HAS to do what I’ve said, like, oh say, to keep him from plunging 1000′ to his death!”.

Rather than addressing this very important aspect of compliance in the same vein as the value of respecting a request, communicating expected compliance, and discovering what it really is to “listen” all in one, very long winded dissertation… I figured I’d split them up a bit.

From the previous post… continuing –
…That said, there are instances when the adult cannot fully articulate the entire phrase, including something along the lines of “compliance is expected”.  These sort of instances might be when walking in the city and or parking lot and the child is suddenly in some sort of danger.  In times like this, the adult often cannot sputter out much more than a “STOP” or other imperative in time, and the child’s safety depends on compliance. I’ll discuss this in a separate post.   This is when the sound of the adult’s voice, and the tone that is used (that being of imminent danger – the adult is responding out of fear and the kid can hear it, the urgency and importance, in the adult’s voice) is all that is required for the child to comply.

If the parent has established this foundation (their interactions and expectations being worthy of the child’s trust) and level of respect with the child from the beginning (whether from birth or whenever the child comes under the protection and guidance of said adult), they are in a positive position to provide the consistency and stability necessary that in a situation of threat/safety, the child will interpret accordingly and, if they are developmentally capable, respond appropriately. This is giving the benefit of the doubt to the child and his/her intelligence.. but it’s one that the adult has developed from their end and so is reliable; the adult is comfortable and so is the child.  Given, however, humans do not always behave predictably, so I would encourage the parent to be within reach of physically sparing your child harm, in the event they don’t process your words as you need them to.

AND IF THEY DON’T (process correctly), after the danger has passed, please simply reiterate to them what happened in a flat and respecting tone, reiterate your command and the value of their response having matched, and move on (unless they want to talk about it).  Don’t rub it in, don’t demean or diminish. And don’t think this is your chance (while the body is on heightened alert) to teach a lesson… as it will be one delivered and received with an association of fear.

When my little one was just learning to walk, I took her to the park one day.  At this point (she was not quite 10 months old), she knew many signs that we used to communicate to her.  She didn’t start signing much back until a few months later, but she understood them.  She also understood an expansive list of verbally communicated words.  (We so often do not give enough credit of comprehension to our littlest ones until something happens to forces us to realize just exactly how much they are absorbing and processing.)

We were walking, hand in hand, just a few feet from our home over to the park (across the street).  I had stopped to grab the mail and releasing her palm for a moment, reached into the box to retrieve the letters.  In a matter of less than two seconds, she’d decided to explore at full speed and, after somehow traversing the curb (didn’t know she could do that yet), she proceeded into the cul-de-sac, dangerously close to the through street.

Now, mind you, I was within reach of grabbing her back and protecting her, but I decided to use my voice instead.  (I’m not sure I actually made a conscious decision either, but that’s what ended up as my response.) I instructed her to stop walking and stand still.  She turned to my face, stopped and stood still, reached out her hand and said, “Mama, come.”

From that day on, my trust in her intelligence grew and grew, as has my trust in my own regard for her and the value of it.  So, again, while I wouldn’t recommend relying entirely on a little one to process your verbal instruction sufficiently to prevent harm, there is a really good chance they will if you have set up a foundation for them to draw upon, even unconsciously.

Why do you think we are sometimes compelled to scold or punish our kids when they do something (or don’t do something) that causes us to fear for their safety? What exactly is going on there in the adult’s mind and response systems?

Also, what connections might be drawn between parents who respond immediately to infant’s cries, and a baby/toddler/young one responding immediately to the parent’s communiations?

For additional reading on this topic, please visit Dangerous Situations