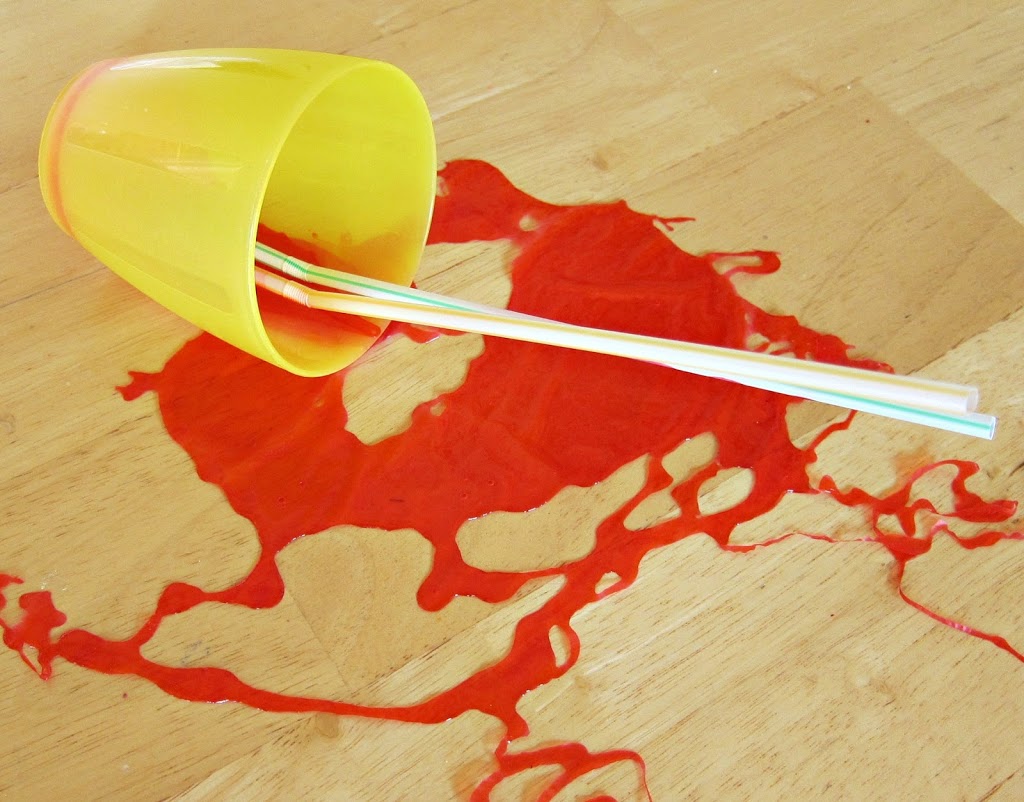 
From… Why We Don’t Punish & What Discipline Is

Rachel says,
“We do a lot of natural consequences-based discipline. Sometimes I remind of the natural consequence that might happen and other times I just let it happen. If the pinecone pieces weren’t bothering me (though I totally understand why they were bothering you), I might let my daughter step or trip over them to internalize the issue with leaving pinecones on the floor.”

Agreed.  In many cases, I will also do just that – let her step on one and internalize the value in them not being left in a place that can aggravate.  Let me tell you about an incident that happened just the other day that went ok, but I wonder if any of you have ideas on how I could improve.. Read on, you’ll see why I ask.

The other day my daughter decided she wanted a glass of juice.  So, after successfully pouring it all by herself (a significant feat), she sat down on the steps to indulge.  But then something got her attention, and off she went, with the glass of juice left quite dead center of the step.

Just as she was leaving, I gently mentioned she might want to move it to a safer place.  She said, “nah, it will be fine.”

A few minutes later (the cup still on the step) the door bell rang (mail) and the dog went crazy as usual.  Guess which path was the most direct to the door for said dog.  😉

My little one was very upset that her glass of juice was then found splashed all over the floor, and she turned that anger toward the dog. Pretty natural response, if you ask me.. but not a welcome one in our house because 1) it was her responsibility to not leave the cup in harm’s way, and 2) we sort of rather attach an expectation on our dog that we might a 6 month old.  So, I stopped my kiddo from yelling at the dog by stepping in between her and the dog, and squatting to be eye level with her.

I asked her to tell me why she was yelling at the dog.  The flubbering of annoyed and irritated explanations followed, something along the lines of “that dog doesn’t see my stuff, she goes nuts, it’s just the mail lady..my juuuuiiizzz…. I don’t like you (dog) anymore… MAAAHHHMMM I want more juice.”

Mom responds, “I think we should get this cleaned up and then talk to London (dog) about being so upset with her.  She didn’t spill it because she was trying to make you feel yucky, it was just there and she is sort of like a tornado coming through when the door rings.”

Kid responds, “She (dog) shouldn’t have…” on and on with the should-nots.

Mom’s annoyed.  Takes breath.  Tells kid, not exactly gently, “Please go get the paper towels from the kitchen so we can clean this up.”

Mom retorts, “So, get some!…after this is cleaned up.”

Mom’s still annoyed.. not regulating well.. not seeing world through any eyes but her own and they’re rather jaded at this point. “Bugz, I want to help you clean this up.”  (Notice how I worded that… it’s typical in our house, but this time I didn’t say it with much in the way of respect or gentleness in my voice.)

Kid’s thought process… Mom said I can have more juice after the mess is cleaned.  Mom didn’t say I was expected to DO the cleaning.. I just want my juice back…

Mom is getting impatient while kid processes.  Mom’s thinking – never going to let her have juice in a non spill proof cup again!!  Mom’s also thinking of all the stuff that she isn’t getting accomplished as a result of the mess requiring her attention now….

Mom has forgotten (that would be me – the mom) a whole slew of stuff, particularly the value of relating, the value of being a mama who chooses to mentor with grace, and most importantly, the seeing the world through my eyes and my kid’s part.

So, what did I do?  I chose to keep my eyes from rolling, keep my breath from sounding like a steam engine in wait, and keep my mouth shut and stop being annoyed because masking it does no good at my house.  And then I cleaned.

Bugz didn’t help me clean up much, but she watched me.  She waited until it was all clean before asking (this time, she asked) for help getting more juice.  She was worn out, emotionally spent.  I was too.

It took me a few minutes after getting everything cleaned up, and settling my little one (with her juice – in a spill proof cup, I might add, and no I didn’t have to deny her a cup/glass of her choosing.. she’d let that go by then, she was actually thirsty) into an activity, before I was able to realize that she and I were so worn out because of the power struggle I caused.  I know, I know…  I know it’s unnecessary, it’s harmful.. these dumb battles over control. I also know what and how to not only avoid them but prevent and/or stop them all together if they get started.  I know…

I know how damaging these stupid little struggles over power can be to all involved,  especially the little one(s).  Yet, I failed in this instance to retain my own self control in effort to make it possible for my little one to retain hers, for the purpose of preventing a power struggle from beginning in the first place (which was exactly what I was trying to stop my kid from instigating or making use of with our dog).  I can make the excuse that I was tired and just rather impatient that day, and it would be valid.. and worth validating to some extent for my own purposes (and likely hers), but that’s not good enough.  It can’t stop with the explanation or an excuse. If it stops there, if I stop there, nothing is resolved and nothing is made better, and my daughter learns that while mom expects daughter to hold herself accountable (she may be barely 4 years old, but she demonstrates a clear understanding of the concept in most cases), the same expectation isn’t there for mom.

Double standards don’t work.  Kids ALWAYS see through them.. as they should.  Furthermore, forcing a kid to tolerate and cope with a parent(s) that uses double standards teaches them how to become adults that play by the same rules.

So, eventually, after watching her for a few minutes (out of sight), I decided that this time the best option was to just continue to keep quiet and give each of us some space.  It wasn’t ideal..wasn’t what I hope from myself.. but I think that in the very least my kid may have learned something useful about physics and Murphy’s Law.

I learned a lot about me, about her, about my reactions, and about choices I have and the subsequent positive change that can come depending on what I choose.